StarFox64 will go down in history as one of the best games for the Nintendo 64. It has sold the more copies on one day than any other Nintendo 64 game, and was ranked #1 in Nintendo Power's 100th issue. It uses the features of the system well, and adds a higher level of involvment to the original game. A large variety of 3D environments exist, and use not only the standard corridor mode found in the original game, but a new, all-range mode, which allows for a true 3D space flight experience. The graphics are superb, and the control and handling is simple and fluid. Also new is the Rumble Pak, which emits a vibration as it receives feedback from the game; it fits into the controller pak slot. This game is not to be missed.

The Tale of Lylat. The story is not an entirely new one. In effect, it is more of a re-write of the original story than a sequel, and newer, key elements are added into the story to make it a refreshing play experience.

The evil menace Andross was exhiled years before by General Pepper to the hostile planet, venom. He used to be a brilliant scientist, but his experiments harmed the land and its residents. When he would not leave, he was forced into exhile by General Pepper... and forgotten. 5 years later, he has resurfaced and his vile rage has caused him to declare war on Corneria, home of most of the Lylat system's population, and the main center of commerce and travel. Knowing the Cornerian army could not defeat Andross' army, General Pepper asked the StarFox team--a band of Mercenary's led my James McCloud--to invade Venom and stop the menace of Andross.

James and his two wingmen, Peppy Hare and Pigma Dengar, led an assault on Venom, where Pigma betrayed the team, and turned his two comrades over to Andross. Barely escaping, Peppy returned to Corneria to inform Fox, son of James McCloud, of his father's death. Turning down the role of the Leader, Peppy asked Fox to lead a new StarFox team against Andross. Fox agreed, and enlisted the reckless, but ace-pilot Falco Lombardi, and the care-free mechanical whiz, Slippy Toad. Together they would journey through the Lylat system and stop Andross. Meanwhile, Andross has been making some headway into the system, and has created many devices of war and bio-weapons. Can the StarFox team defeat Andross and save the Lylat system? Only you can decide.

Aerial Maneuvers and the Game. The game fetures a variety of maneuvers and stages. From the scenic corridor mode of Corneria, to the awesome, all-range battlefield of Bolse, players will feel immersed in the game's stages. You will feel the heat of solar flares on Solar, and the dust will whip accross your windshield on Titania. You'll even get to delve into the depths of the ocean in Aquas, a planet covered in water. You can watch in amazement as you shoot down searchlights on Zoness to avoid detection as arches and sea serpents appear before you.

Inside lies the mysterious Sector X, an area of radiation in which space dust has collected into the shape of the letter X, and where floating construction hazards lie everywhere. You'll battle the enemy as they attack the Cornerian fleet at Sector Y, and go up against Venom's toughest guns at the enemy-packed gauntlet of Area 6. After this, perhaps you'd like a quaint detour through the asteroid field called Meteo? Or perhaps saving the base at the ice world of Fortuna is more appealing.

Faced paced action and targetting will thrill you as you battle to save the base at Katina from enemy atack and ultimate destruction in a setting that looks like it was taken directly from ID4. You'll also fight in an all-out battle to save your mothership in Sector Z, where 6 missiles threaten its safe passage. And finally, you'll take on an enemy supply train and try to derail it on the mineral-rich world of MacBeth.

There is much your vehicles can do, from barrel-rolling and deflecting shots to performing somersaults in mid-air. You'll find bombs and upgrades to your lasers for massive destruction, and you'll tilt to fly through thin, vertical passages. You'll even be able to lock onto targets and fire a powerful, charged blast. The superb control allows you to fly almost anywhere, and to blast anything with some practice. Just wait until you find yourself pulling U-turns to fight a giant robot boss in all-range mode!

Vehicles. Many vehicles exist for your use.

Since you'll encounter varied terrain, you may need more than your standard arwing. You'll traverse two different stages that use the landmaster tank, and one that makes use of Slippy's Blue-Marine submersible.

The Arwing is your standard vehicle for most of the stages. It is equipped with a G-diffuser, which allows it to brake and boost in mid air, as well as perform advanced maneuvers such as somersaulting an U-turning. In addition, the forces created by the G-diffuser creates a shield when barrel-rolling which will deflect lasers. The arwing comes standard-equipped with a single laser which is fired from the nose of the cockpit. 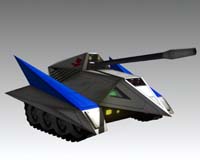 Along the way, laser upgrades can be found that allow the arwing to fire two lasers: one from each wing. This can be further upgraded to a stronger laser. The wings are not made for high-contact, and will break off if they suffer too much damage, thus resulting in a loss of any laser upgrades. The arwing also comes equipped with a bomb-propelling device, and can store 9 such bombs with 3 being standard cargo.

The Landmaster tank is the preferred vehicle to use in a ground-strike. It's treads can climb terrain easily, and its built-in G-diffuser allows it to propell quickly to the side, up a slope, roll, and even hover for a short time. Due to the ammount of power it takes to propell this craft, the G-diffuser does not generate a shield when rolling.

The tank comes equipped with its own cannon which cannot be upgraded, but is slightly stronger than the arwing's laser. This cannon is also capable of firing bombs, of which it can hold 9. The standard cargo is also 3.

Finally, the Blue-Marine submersible is a submarine that was originally developed as a recreation unit by Slippy Toad and his father from salvaged arwing parts. Due to fighting Andross, it has been converted to be able to attack underwater.

It uses the same firing device as the arwing, but it cannot charge or lock onto enemies. It can generate light torpedoes for heavy damage and to light the path ahead. The sub features a unique targeting mechanism which directs the torpedoes to their targets.

Sound and Music. StarFox64's music sets the mood in each stage. From the melodic harmonies in the ocean world of Zoness to the fast-paced and frenzied music in the chaotic battle at Sector Z, you will be set inside the surroundings. Very few tunes are repeated in the various stages, allowing you to have a fresh mix of music to listen to on your journey. There is even a hidden sound test in the game!

Just wait until you hear the eerie tune of Andross' theme, and feel the rush and panic as you hurry to escape his lair!

This game has a full complement of sound effects. You'll hear the loud viberations from the proximity of the huge attack carrier, and hear the thwack of a metal plate being hurled at your arwing by an insane robot in outer-space! The sounds of lasers will rock your ship as you are chased by Wolf O'Donnell in his Wolfen-class starfighter, and many other unique sounds will flood your ears as you progress on your journey.

If all that isn't enough, get ready for the new wave of sound in video games! Over 20 characters have speaking parts in the game, with around 700 different sound clips. Some of them are available at starfox64.com, and I will provide links to them from my main page. You'll laugh as Slippy toad threatens enemies in his high-pitched voice, and sigh as the ever-arrogant Falco gets into a pinch. You'll learn to tell what enemies are doing by what they say, and can listen to Peppy's advice without having to look down at a message!

Just wait until you hear the enemy taunt you right before your final blast makes them curse you as their craft is destroyed. You'll laugh at the comic remarks of the fighters at Area 6 as you break through their lines!

A Compliment of Minions. This game features a huge amount of creatures and ships to block your safe passage. From the bee-like robots in several stages to the space snakes in Meteo, you'll be pressing the fire button until your thumb is peeling. Don't expect to ever get a rest as giant space stations and battle cruisers drift by, launching a horde of scout ships to face you.

Not everything can be destroyed, such as the huge attack ships in Sector Y. Some things take tons of hits to destroy, such as the bombing birds on Zoness, and the large crabs on Titania. At times you'll be overwhelmed by massive hordes of ships, like in the canyons of Venom, and in the opening areas of Sector X. Expect to be met with many forms of fierce resistance.

Dastardly Lieutenants. Andross' Lieutenants have been given high command in his army. Many will bar

your path as bosses which must be destroyed to proceed. Also included in the boss line-up are the devious bio-weapons of Andross; creatures possessing immense power, which much be destroyed! You'll face a huge, molten beast in the fires of Solar, and torch the Shogun troops of Andross in Sector Y. You'll also get to meet the master of mayhem himself, Andross! There is a large variety of Lieutenants in the game, and you must learn to destroy all of them. Listen to Peppy's advice to pick up some pointers. Some of them are particularly difficult, such as the mighty Goras of Titania.

The Anti-Heroes. Every game needs a villain, and StarFox64 introduces the evil StarWolf team to the collection of video game villains. This group flies Wolfen-class starfighters that are comparable in capability to the Arwings. The team is led by the evil Wolf O'Donnell, who is nearly the equal to fox in piloting skill. Second in command is the sadistic Leon Powalski, who likes to make his targets suffer. The traitorous Pigma Dengar shows up, along with Andrew, the nephew of Andross.

Later on, they will upgrade their ships to the Wolfen 2 prototype to protect Andross. This ship is much more advanced than even the arwing!

This game is of truly legendary proportions. Go out and rent a copy today to see all the action. You'll soon want to buy the game for yourself to test out high scores and battle the forces of Andross. If that isn't enough, you'll even have the option to play in 3 different types of multiplayer battle! Prove to your friends who is the best, and bring home the victory cup! My page will serve as your guide to be the best!

Back to the Main Page