How to Defeat StarWolf 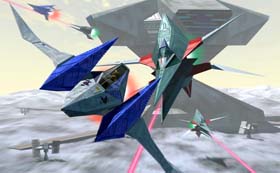 Every game needs a villain. Star Fox serves this up nicely, creating the maniacal Andross. But, unlike many games, StarFox64 serves up another flavor of the day. Added into the game is a team of evil pilots know as StarWolf. Their ships maneuver much like the StarFox team's arwings, only not quite as good. As it is, they can be quite a pain to fight, as they often follow your teammates, who wouldn't pull a somersault or U-turn if their lives depended on it--and they do. So, while trying to destroy the team, you are constantly bothered with having to save your allies' hides. Such is life in the Lylat System.

Where is Star Wolf, anyway? Star wolf has a nasty habit of showing up at a few places. You will probably first fight them on Fortuna, when the bomb is planted in the base there. Succeed, and you head off to Solar. Fail, and continue into Sector X. StarWolf will show up on the Bolse satellite defense station if you fail to wipe them out on Fortuna, or fail to go there in the first place. They are quite an annoyance here. Finally, if you enter Venom from Area 6, you will have to fight them--they guard Andross' lair.

Below are good strategies to defeat the StarWolf team at their own game. While these work rather well for me, and should for you, don't be surprised if you don't manage to pull them off. Sometime you just have bad luck.

There are some general things to know about fighting them. Each one follows a certain person. Wolf will follow you, Leon will follow Falco, Pigma will follow Peppy, and Andrew will follow Slippy. If one of your wingmen is down, the StarWolf member following them will chase you. Falco probably won't say anythign if he is being followed, but chances are, he is. Occaisionally you'll hear him say "I can't shake this guy." If you hear wolf say "You'll be seeing your father soon, Fox." loop a loop, now! He always says this when he is right behind you and is about to fire. Leon will say "I'll take care of you" if he is about to fire. I am not yet sure what the other two say. It is best to rid Slippy of Andrew first if you can. Otherwise, kill off Wolf. Rid Peppy second, and then finish off Leon, who will be chasing Falco.

StarWolf's Wolfen ships cannot maneuver quite as well as the arwing, but are very comparable. They don't seem to be able to pull off somersaults, which is one saving grace. They can, however pull a U-Turn and will do so if they are very endangered (ie. you are right behind them, or are tailing them effectively). There U-Turn is usually executed high up in the air, to make it harder for them to be hit while performing the turn. Wolfen ships perform their turn very tightly. It is mostly equivalent to the tilting turn of the arwings, only it is not quite as sharp. Wolfen's are equiped with standard lasers.

There are a few very basic things that should always be done when in a dogfight. First on the list is identifying them. This may sound simple, but on Bolse, the Bolse Defense Fighters (BDF's) look very much like Wolfen ships if you aren't paying close attention. Radar helps a lot to determine where the ships are, and if the ship you are paying attention to is a Wolfen ship. Once you can identify them, the rest becomes easier ;) next on the list is avoiding them! These guys won't move out of your way should your paths cross. While crashign hurts them, too, it'll hurt you also; this is a bad thing. Also, if you should be heading at around a 90-135 degree angle at each other, they are going to fire, and you might not notice them until they pass you. Try to pay attention to your radar so that this doesn't happen.

Wolfen ships love to get behind you. This can be both good and bad. (If you are new to this, you're probably thinking I am insane at this point). When they get behind you, the good outlasts the bad. The bad part is that if you aren't paying attention, you'll probably lose some life. The good is that it is when they get behind you that you can set them up for some damage. After practicing for a bit, you'll notice how close they will get before them unleash their fire. Right before the point where they fire, do a somersault. They will move in front of you, and then turn. All you have to do then is hold a sharp turn in the direction they turn, and you'll probably deal some hefty bang. Eventually, they will execute a U-turn if taking too much abuse. Also, if a ship gets behind you, and your boost gauge is empty, hit a sharp turn to the left and right and hold it. They will miss with all of their shots and eventually you'll out-turn them.

Now, about charged shots and bombs... I'm not sure if bombs are effective or not on the Wolfen I. They don't appear to do much damage, anyway. Just don't use bombs unless you can get a direct, close-range hit on them. Charged shots are just useless. Normal vollies of lasers do more damage on average, because they are much quicker to fire. For example, suppose Woflen ships have say... 200 health units. Charged blasts take say... 10 units off, and single lasers take, say... 2. Now, in the time it takes to load a charged blast and lock and fire, you can volley off about 6 or so single lasers. That's 12 damage from the volley, and 10 from the charged. Now, if you have twin, that is about 24 from the volley, and 10 from the charged blast, and with hyper, its 36 from the volley, and well...you see my point. Just use vollies of you lasers. You'll deal more damage.

Here, I will list some more advanced things you can do while comabtting StarWolf. Not all of these are useful, in fact some are just plain dumb. Some of them will help out in various ways, and others are just for fun. So check them out.

Sharp Traptic. This isn't exactly advanced in a 'hard to do' kind of way, but nevertheless, it's not a bad tactic. Loren Jones suggested that you can defeat StarWolf simply by holding a sharp turn throughout the whole stage. This will shake of evil bogeys, and any ship will eventually get into your sights. Basically, you hold a sharp turn (away from obstacles) and if a Wolfen ship gets near, you chase it and fire at it. If it gets away, just go into another held sharp turn. Not a bad trick, but you won't save your friend that way. This is most useful if two or so wingmen are dead and you have 3 or so wolfen ships after you.

Non-Lock Bonus. By using the Non-Lock Technique (see my weird stuff guide under misc info), you can get a few extra points from the mad, bad, Wolf team. When they near a pillar or a hill, you can charge up a blast, then fire at the pillar. If the blast hits the Wolf member, you'll snag a quick hit+1. If two are nearby, you'll get a hit+2. Don't think you'll get to do this very often; it is quite a rare chance.

StarWolf can Crash, too. Kevin Rocco Beto reports that you can sometimes tiem a charged shot just right so that a wolf member will be knocked to the side a bit, and crash into a pillar, killing him instantly. In theory, this makes sense. I guess I'll have to go and try this out now :)

Shield Breach. This is purely theoritical in nature. I believe that StarWolf's Wolfen II shields deflect x number of hits before being breach. Charged shots and bombs count as 1 hit, and each laser counts as one. So, my theory is that you could fire off a quick volley of lasers to penetrate the shields (thus causing damage) and immediately bomb with a direct hit and give the Wolfen II some bomb damage. This has yet to be tested.

How to beat StarWolf on Fortuna

These guys suck on Fortuna. They almost never U-Turn if they are being tailed, and then aren't particularly devious. You just do your basic standard combat practices and you should do fine. You only have to watch that you don't crash into the base, or a high hill. Chance are, you won't be near enough to the pillars to crash into them.

How to crush StarWolf on Bolse

The team isn't really that much harder to beat on Bolse, but various obstacles get in your way. First, the BDF's look a lot like the Wolfen ships, so you may target a BDF instead of a Wolfen, or you may lsoe track of the Wolfen in groups of BDF's. Next, you'll probably cover a large field when fighting them; the pillars get annoying in this instance. And then there is that annoying core that happens to be smack dap in the middle of the place, and you always seem to end up nearby it. This gets to be a pain if some of the relays are destroyed. Other than that, it is much the same as on Fortuna. Your wingmen get into trouble from both Wolfen and BDF ships, so you'll have to be extra-careful if you want them to live. The Wolfen pilots pull U-Turns much more often, and are a little stronger on the tactical side.

Defeating the Guards at Venom

You now have Wolfen 2 ships to deal with. These guys take more hits to kill, mostly because they have a deflector shield that diffuses lasers for a few blasts. You must fire at their shields quickly to wear them down, so that they will take damage. Also, Charged blasts are utterly useless. The shield deflects them all. And the same goes for bombs. You need to finish off as many of your wingmen's persuers quickly, so that they stay alive. If a wingman goes down, that is just one more Wolf member you have to contend with. Hit them hard and fast. Use some of the advanced combat practices if you think they will help. And make sure you answer ROB64's hail. The ships maneuver much the same, only they turn better, and perform U-Turns quite often. They are equipped with twin lasers, too. Just try to get them to turn away from you, and then hold a sharp turn while fireing rapidly at them to break the shields and cause damage. They'll U-Turn if they take onyl a light amount of abuse, so make your shots worthwhile. The Wolfen II's often follow far behind your wingmen, so make sure you don't egt in front of them, or the wolf member that was following your wingmen will digress and follow you instead!

Back to the Main Page